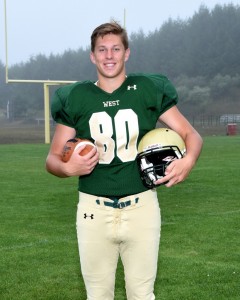 West Student Senate voted Ryan Hayes West Athlete of the Week for his courageous performance in the MHSAA District Football game vs TC Central.  Ryan made plays on both sides of the ball; including catching a touchdown pass to put the Titans in front in the second half.  Ryan is an exemplary three sport athlete and we look forward to watching him on the hardwood as Basketball season begins in a couple of weeks.