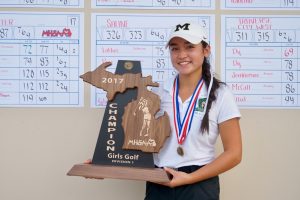 Anika, a 2019 grad, dominated the prep golf landscape in Michigan during her four years at West.  Bursting onto the scene as a freshmen in 2015 she led the Titans to a Division I State Championship and finished one stroke away from an individual crown.  Anika established school records for scoring average in a single season & career, she also carded an incredible 63 at the Currie Golf Course in Midland to set the low round mark.  She was named the Big North Conference player of the year four times and was medalist in countless BNC events.   Miss Dy went on to win three consecutive MHSAA Division I individual titles (2016,2017 &2018) and celebrated a second team championship in 2017.   She was voted “Miss Golf” three consecutive years by the Michigan Interscholastic Golf Coaches association and topped off her 2019 summer by winning the Michigan PGA Women’s Open.