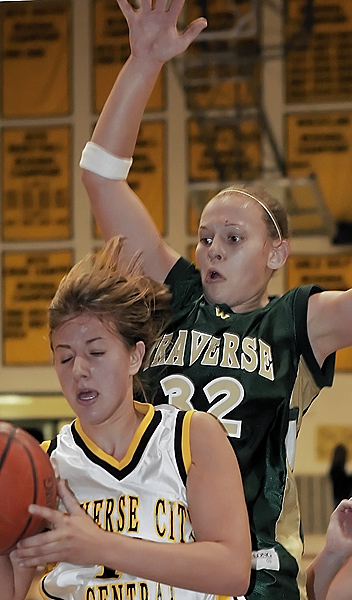 Kalyn McPherson, a 2006 West Grad, was a four year varsity letter winner in basketball, volleyball and track leading the Titans to year round success.   A setter on our volleyball team she was a great asset to a program that won four consecutive conference and district titles along with three straight regional championships including a trip to the MHSAA Division I semifinals as a senior.    Kalyn was a cut above on the basketball floor with an uncanny ability to score; during her career the Titans would win multiple conference and district titles along with a regional final appearance in the winter of 05/06.  In the spring she was a MHSAA Regional shot-put champion and finished 6th place at the state finals as a junior.  This all time great accumulated too many individual accolades to keep track of but a short list would include:  1st team All Big North Conference in volleyball and basketball for three straight years, Record Eagle Basketball Player of the Year, Record Eagle Female Athlete of the Year,  two time 1st Team All State Basketball recognized by the Basketball Coaches Association of Michigan, Detroit News, Detroit Free Press & the Associated Press.  She was a Michigan Dream Team Basketball member finishing runner up in the “Miss Basketball” voting as a senior and was nominated for the McDonald’s All American team.  Kalyn still holds several West school records and remains the best basketball player we have seen at 5376 North Long Lake Rd. She scored more points than any prep player in TCAPS history totaling 2012 for her career,  holds school career records for games played (95),  scoring average (21.1) … holds school single season records for scoring (708), scoring average (29.5), field goals (243), free throws (183) and rebounds (267) … holds school single game records for points (48) and rebounds (20) … set MHSAA state tournament single-game scoring record (48), averaged 25.2 points and 8.0 rebounds as a senior and 29.5 points and 11.1 rebounds as a junior.  This run on sentence exemplifies the impact K had on our school; she will always be remembered for her tenacity and competitive fire.  Miss McPherson went on to play four years of Big 10 basketball for the Michigan Wolverines; following her college graduation she played professional basketball in Europe.   Couldn’t think of a better way to wrap up our all time athlete series; Kalyn McPherson is a great Titan.