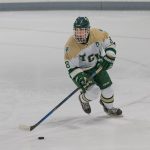 The awards keep coming for West’s Dalton Michael. The forward was recently named Michigan’s Mr. Soccer for the 2016 season. Yesterday, he was named an All-American by the National Soccer Coaches Association of America. In all, Michael was named to the All-Conference team, All-District Team, All-Region Team, All-State First Team, Dream Team, Mr. Soccer, NSCAA

Wrestling opened up the season last night in Mio and went 1-1. Titans competed hard in the first match losing a close contest to Roscommon 37-34. West would bounce back to beat Mio 65-18. Double Winners on the evening include: Jaxon Labreck, Jacob Ransom, Hunter Derry and Elias Sanchez. West Wrestles in Big Rapids on

After a shaky start, the Lady Titans found their form in the second half.  They generated 9 points in the fourth quarter to finish with victory, 28-21. Taylor Metz had 5 points.  Emma Gustafson had 5 points and 4 steals.  Ashley Trouslot led the team with 7 rebounds.  As a team, the intense defense is

The Lady Titans found victory on the road against the Benzie Central Huskies.  Varsity won 44-41; JV won as well, 31-18.  The Varsity team was led by Sierra Perkette with 15 points; Sara Sievers had 15 points and 5 boards; Becca Bohrer contributed 8 points and 10 boards.  The team shot 16/22 from the free

Titan Hockey failed to capitalize on a chance to defeat Division 1 ranked opponent Northville. The Titans played a strong 1st period where Christian Julian put the Titans up 1-0  assistid by Zak Johnson four minutes into the game. The Mustangs from Northville tied the game one minute later and the period ended 1-1. The

On Friday evening, the Lady Titans JV basketball team played Grand Haven at home and was defeated by the Bucs 35 – 25.  Grace Miner led the Titans with 10 points and was also the leading rebounder with 6 boards  Alexis Fulcher chipped in 5 points.  On Saturday, the JV’s welcomed Hundsonville to town and